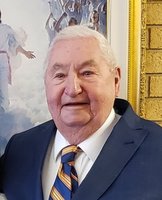 Lorin Daniels (Larry) died peacefully in his home, Tuesday, April 20, 2021 surrounded by family. He went to heaven to reunite with his wife of sixty-three years and love of his life, Boydine James Daniels. Larry is survived by his three children, Denise Daniels Brink, Marty Daniels (wife, Liz Simkins Daniels) and Nancy Daniels Powell (husband, Shawn Powell), thirteen grandchildren and his 22 great grandchildren. He was born March 3, 1935 in Long Beach, California to Lorin and Mary Daniels. Larry is the oldest of 6 siblings: Diana (Alton) Wade, Bruce (Retha) Daniels, Janice (Richard) Laing, Elaine (Mike) Beckstrand, and David (Renee) Daniels. Larry had a heart of gold and was a great example of love and caring to his children, grandchildren and great grandchildren. His grandchildren are going to miss the "pocket" money he would divvy up every time they visited. Larry and Boydine lived in Cedar City for over twenty years where he developed Cedar Knolls and the Cove subdivisions. Under Mayor Shirley he sat on the city's planning and zoning committee. He graduated from Southern Utah University (then State College) with his daughter Nancy in 1985. He and Boydine retired in St. George and lived there for over twenty years until they relocated in 2017 to Riverton to be closer to family. While retired he completed his bucket list of playing every public golf course in the State of Utah. At the age of 83, he bought his dream car, a Corvette. He and his dog Marley, loved cruising and let's be honest, racing in that car. Service will be held Saturday, May 8 at 11am at the LDS Stake Center with visitation starting at 10:00am, 1130 East Brigham Road, St. George, Utah.