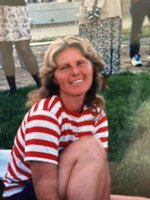 DeeAnn Bozeman passed away Thursday, July 8, 2021 in Salt Lake City, Utah after a short battle with a respiratory infection. She was born in Salt Lake City, Utah on July 9, 1956 to Mary L. (Barnett) and Ward L. Allen, Jr. DeeAnn was raised in Salt Lake City, the third oldest of seven children. One of her favorite pastimes was hanging out with her sisters or friends and listening to music. She spent time looking after her younger siblings and taking them on walks. She was also an avid reader throughout her life. DeeAnn married Curtis Elvin Bozeman, Sr. on July 19, 1975 in Reno, Nevada. They were the parents of three children. They raised their children in Ryndon, Nevada and while her children were young, she was the local babysitter. Friends still mention how good she was with all the neighborhood children. As her children got older, she began working in the local grocery stores, eventually working at Walmart for 24 years. After retiring, she moved back to Salt Lake City. DeeAnn is survived by her three children, Lisa Sheree, Curtis Elvin, Jr., and Daniel Ward, her siblings, Mark Allen (Juanita), Sheryl Woodard, Toni Hargreaves, Jammie Manzanares (Missy), and brother-in-law Butch Seals. She is also survived by 9 nieces and nephews, 14 great-nieces and great-nephews, one great-great niece, as well as three “grandchildren-at-heart”, Zackary, Richard, and Markus Huff. DeeAnn was preceded in death by both parents, her sisters Darcy Bowden and Susan Seals, brother-in-laws Larry Woodard and Doug Bowden, great-niece Elizabeth, and her ex-husband Curtis. Services will be held at 2:00 p.m. on July 17, 2021 at Taylorsville Cemetery 4575 S. Redwood Road, Taylorsville, Utah 84123