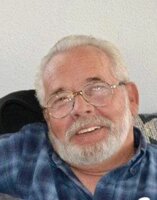 Lew was born on January 31, 1946, in Lovell, Wyoming, to Emily Smith-Ritchie and Lewis Carter. He attended Murray High School in Murray, UT. At 17, he joined the U.S. Air Force. He married Diana Birrell on February 4, 1967. Together, they had two sons, Chad Ross Garfield and Royce Lynn Garfield. Lew loved his country and was very patriotic. He also loved to learn. He liked history, car races and alien shows. He was a self-taught mechanic and earned the nickname "MacGyver" because he was able to fix almost everything. Lew had a passion for classic cars. He loved learning about them, driving them and building them. Lew built many cars, his favorites being his 1946 Ford coupe and his 1955 Chevy Bel Air, which he built with his sons. He was involved with the classic car community, a member of Wasatch Chevys Limited and went to many car shows and cruise nights. Lew was always willing to help anyone in need and was the first to volunteer. Family was very important to him. Lew is survived by his wife of 55 years; his daughter in-law, Olivia Garfield; his grandchildren, the lights of his life, Makayla Cryce Garfield and Hayden Lewis Garfield; brother Clint Royce; twin sister Louise Garcia; and many extended family and friends. Proceeded in death by both of his sons, mother, brother Teddy Carter, mother-in-law and father-in-law, three brothers-in-law and one sister-in-law. In lieu of flowers, please consider making a donation to the Shriners Hospitals for Children adaptive bike program or Kruisers for Kids. A celebration of life will be held on Sunday, May 15, 2022, at 2:00 pm. Valley Regional Park, 5100 S 2700 W, Taylorsville, UT. You will be greatly missed Mr. Happy Please consider making a donation to the Shriners Hospitals for Children adaptive bike program or Kruisers for Kids in lieu of flowers.