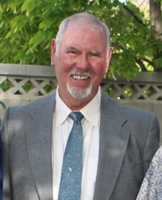 1946-2022 We say goodbye for now to Richard Stephen Duckworth, an avid outdoorsman and father. He unexpectedly passed on September 9, 2022, from complications of pancreatitis. Rich was born in Mt. Pleasant, Utah September 5, 1946, to Helen Serena Monsen and Alfred James Duckworth but was raised in Magna, Utah with his three older brothers. He married his high school sweetheart, Carol Duckworth (deceased 2016) and lived in the Lake Ridge community of Magna raising their four children while working at Kennecott. After he retired, they moved to a senior community in Murray, Utah. Rich loved the outdoors, hunting, fishing, camping, and four-wheeling. Archery deer hunting was his favorite, and many memories were made through the years in the woods. As he got older, he longed to hunt like he did when he was younger and would often retell stories of different adventures while hunting. Fishing became his favorite pastime in his older years. When not in the woods, he loved woodworking, and fixing things. He was quick to show you the projects he was currently working on either for the family, especially the great grandkids, the festival of trees or the neighbors in his community. May 2022, Rich married Patricia Dimbat and was infused with new life with that union. They had many experiences in their short time together. He is survived by his new wife, Pat; four children, Steve (Dina), Kim (Mark), Amy (Lonnie), and Shane (Lisa); 12 grandchildren, Ryan, Jessica, Justin, Paul, Shylee, Katie, Elizabeth, Shay, Sarah, Eric, Lexi, and Nathan; and eight great-grandchildren. A celebration of life will be held Monday, September 26, 2022, at 11:00 am in the Church of Jesus Christ of Latter-Day Saints Chapel at 6300 South 700 W, Murray, Utah. A meal will be held in the outdoor pavilion at the same location directly following the services.