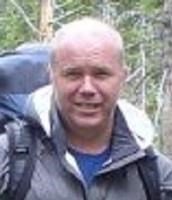 Please share a memory of Russell to include in a keepsake book for family and friends.
View Tribute Book
We miss you, Russ Our beloved brother passed away on May 6, 2021, age 55. Russ was born April 7, 1966 in Anaheim CA to Jack and Ardella Dahlgren. The family later moved to Utah where he graduated from Kearns High School in 1984. Graduated from Salt Lake Community College Culinary Arts in 2014. Married Teresa Jarvie in 1994; later divorced but remained close throughout the years. Russ enjoyed skiing, snowboarding, skateboarding, hiking and backpacking, Star Wars, 1980s New Wave music, math, science, and astronomy. He is survived by sister Cindy Dahlgren, Tempe AZ; brother Dave (Allison) Dahlgren, Reading MA; nieces Gabriella and Katherine, and nephew Bryce; half sisters Georgeanna, Christine and Sharon; nieces and nephews Kim, Kevin, Robbie, Kelly, Brandi, Sarah, Lacey, Geoff, and Mike; many cousins; and former wife Teresa, Sandy UT. Preceded in death by both parents. At Russ's request, there will be no funeral service held. Cremation was performed in Salt Lake City. Many thanks to Holladay Healthcare Center for their compassionate care.
To send flowers to the family or plant a tree in memory of Russell Dahlgren, please visit Tribute Store

A Memorial Tree was planted for Russell
We are deeply sorry for your loss ~ the staff at Independent Professional Services
Join in honoring their life - plant a memorial tree
Services for Russell Dahlgren
There are no events scheduled. You can still show your support by sending flowers directly to the family, or planting a memorial tree in memory of Russell Dahlgren.
Visit the Tribute Store
Print
Online Memory & Photo Sharing Event
Online Event
About this Event