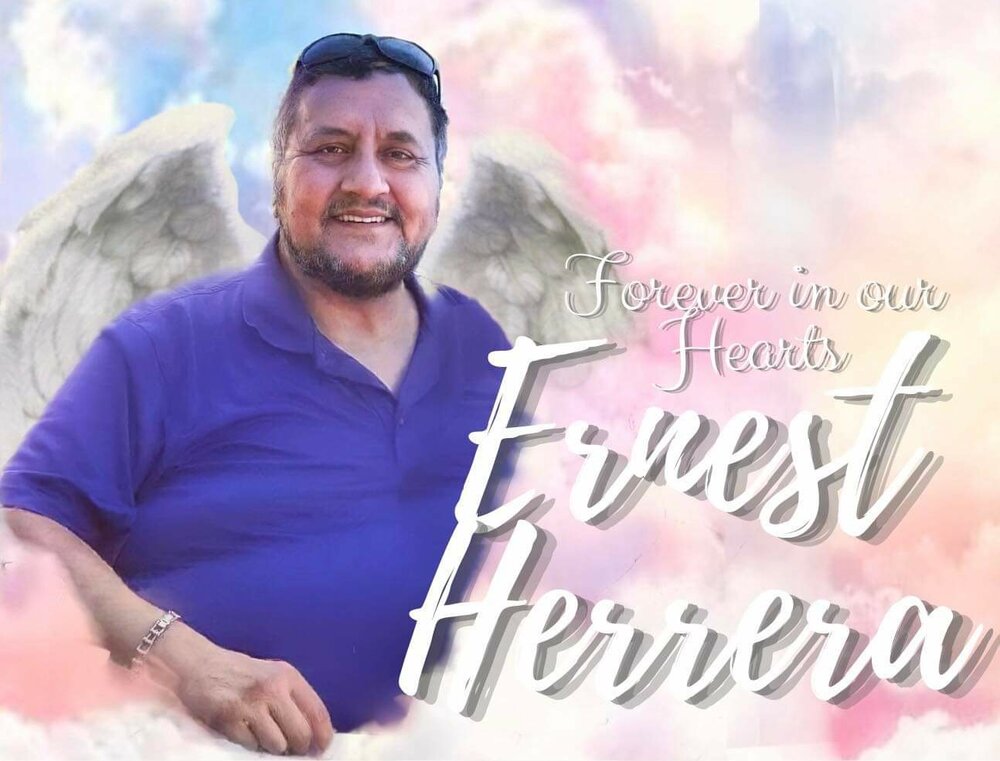 Please share a memory of Ernest to include in a keepsake book for family and friends.
View Tribute Book
Ernest Ronie Herrera returned to his Father in Heaven December 16, 2021 surrounded by the love of his wife and family. Ernest was born March 29, 1961 to Epifaneo and Natividad Herrera in Monticello, UT. As a child, he and his family spent many hours camping and exploring the national parks and wilderness areas that surrounded Monticello. He loved fishing in the lakes on Blue Mountain and playing at Arches National Park and Canyonlands. He moved to Ogden, UT in his early 20’s. During that time, he worked in the oil fields in Wyoming. He loved getting on a helicopter and flying out to the assigned blasting sites. The flight satisfied his sense of adventure and fun. While he lived in Ogden, he attended a trade school and learned the basics of accounting then worked for several years as an accounting clerk. He then moved into warehouse work where he specialized in inventory control. Often he was hired to clean and organize a company’s inventory system so it could be tracked. Ernest was born with a heart defect, and as she got older, warehouse work became too taxing on his body. When the opportunity arose, he took a position working as a customer service rep for a medical conglomerate out of California. He had a soft, soothing voice. It was easy for him to talk to patients and calm their fears. He then would schedule appointments or refer patients to the nursing staff for further assistance. He married Raejean Lewis September 4, 1993 in Ogden, UT and very quickly became an integral part of her extended family. After he married, they moved to West Valley, UT then settled into their own home in Magna, UT. Ernest was a kind and gentle man. Everyone who met him immediately liked him; and he liked everyone in return. Ernest was also very generous. He would help neighbors and friends any time he was asked. Often people who had fallen on hard times would knock on the door asking for work. He would always find odd jobs around the yard in order to give them the dignity of earning money for their needs. He and Raejean opened up their home to friends and family members who needed a place to live. It was their joy to be surrounded by family and friends. Ernest is survived by his wife Raejean, his brother Daniel (Clara) and three sisters; Sylvia (Manuel) Rincon, Olivia (Gilbert) Paez, and Lorrinda (Blas) Morales. He was preceded in death by his parents Epifaneo and Natividad and his sister, Helen. Ernest also was a father figure to Helen’s daughters, Sherette (Katrina) and Catrina Contreras and considered their children, Derrik (Carly Garcia) Herrera, Mariah (Ben Roupp) Herrera, Adrian Contreras, Diego Contreras, Xavior Herrera, Samarie Herrera, Amira Herrera, and Alayah Herrera.his grandchildren. He truly loved his family and all his nieces and nephews, and would do anything to help them become successful in life. Ernest loved Knowledge. While formal education was not on his list of favorite things, he loved learning new things. He read a lot and loved to watch shows that highlighted science and mechanics. He liked to end his day by repeating one new thing he learned. It was always a game to him when the nieces and nephews came home from school for him to ask them what new thing they had learned that day. He also was very creative and had a secret artistic streak. He was so handy with household repairs and often would come up with creative but effective ways to repair things. He enjoyed creating things. He would make lamps out of plumbing fixtures and pipes. He also really enjoyed making things out of resin. He would fashion trees out of wire then secure the with a resin base then add a light to it to create unique pieces of art. Before he died, he made one of these creations for his brother and sisters. He really looked forward to the day he and Raejean retired so they could create beautiful projects together. Ernest was a joy to his wife, his family, his in-laws, and every one he met. He carried a quiet confidence that told the world he was content and happy with who he was. He always had a slight smile on his face, and many times he and Raejean would talk about what a great life thy shared and how happy they were. Ernest loved his life, he loved Jesus, he loved his wife, he loved his family, and for those who really knew him, he loved his Thor. He will be missed by so many people. The world is a sadder place in his absence. A memorial service in Ernest’s honor will be announced and held at a later date.
To send flowers to the family or plant a tree in memory of Ernest Herrera, please visit Tribute Store

A Memorial Tree was planted for Ernest
We are deeply sorry for your loss ~ the staff at Independent Professional Services
Join in honoring their life - plant a memorial tree
Services for Ernest Herrera
There are no events scheduled. You can still show your support by sending flowers directly to the family, or planting a memorial tree in memory of Ernest Herrera.
Visit the Tribute Store
Print
Online Memory & Photo Sharing Event
Online Event
About this Event